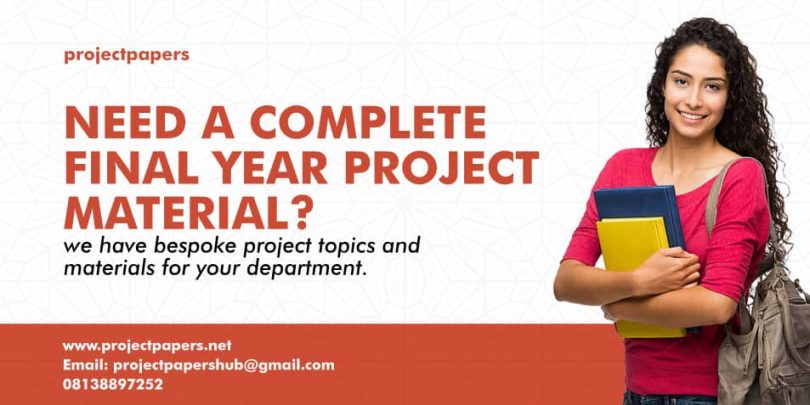 The federal government being a non‑profit oriented organization generates its revenue through various sources. These1hources include: Taxes, Loan and grants, Investment, Rates and Rents, Court Fees, Royalties, and, Sales of confiscated properties.

In this project work, we shall be looking into the Value Added Tax (VAT), which is the most effective of all other Taxes, due to the process and procedures involved in its collection.

In chapter two we shall be looking into people’s opinions and ideas on’ Taxes generally, precisely on the VALUE ADDED TAX (VAT).

However, In chapter three, the method used in this study will be explained in terms of population sample. Size and sampling technique Research instrument and method of data analysis collection of data analysis and statistical tools.

Attention will be focused on breakdown of the data collected as well as the analysis of the data and the testing of the hypothesis in chapter four, the final chapter of this project. will be the summation of the findings, the conclusions reached as well as providing practicable recommendations that can help in checking and restraining the savage cycle that has made VALUE ADDED TAX (VAT), ineffective in terms of revenue generation.

VALUE ADDED TAX (M) as it is called is one of the means through which the government generate fund and could be said to be the most effective of all other taxes due to the process and procedure of its collection. Generating funds generally through the public tax be faced with a lot of administrative bottlenecks, this is why we are looking at VAT and to compare it with other taxes and see how effective they are and to use VAT as a means or yardstick of measuring the effectives of generated fund but before then a brief history of this value added tax and the rational for introducing the tax into Nigerian economy will be examined.

Taxation has been in time memorial but the year 1991 was a major trademark in the tax administration of Nigeria, in that year the Professor Edozien led study group on the review of Nigeria tax system first identified, the need to transform the old scales tax that was then administered by the state government. Within the same time, another study group on indirect taxation led by Dr Sylvester U. Ugoh was given the task of studying the feasibility of introducing value added tax after making series of consultation, studies and researches both within and outside the country, the Ugoh study recommended in November 1991 that after two years of preparatory work.

As a follow up, by 1991 the Isewere led modified value added tax (MVAT) committee was set up to undertake preliminary work for the introduction of the new tax. The committee was later to work in close collaboration with the federal Inland Revenue ser4ces, in 1993 for them to take over the administration of the new tax, which was scheduled to come on stream as value added tax by 1st September 1993.When the federal government agreed to introduce the new tax, decree No. 102 of 1993 was promulgated to back it up. Although the scheme did not actually commence until 1st January 1994 due to administrative bottleneck which were initially encountered by federal Inland Revenue services so value added tax was therefore introduced as a replacement of the sales tax.

There are currently five administrative bodies set up in Nigeria since 1992 to look into the related issues of tax. These administrative machinery are important for the proper management of tax in Nigeria most especially value added tax.

Value added tax is borne by the final consumer but collected at each stage of the production and distribution chain. It has a wider coverage than the sale tax and cover both imported and locally manufactured goods except where a particular goods or services had been described as exempted under the decree. So many companies tend to confuse value added tax (VAT) exemption with tax exemption but under the decree individuals companies or organizations are not generally considered for VAT exemption as only goods or services may be so qualified.

In the 1930’s professor Card Shoup together with an economist named professor Seligman wrote for Cuba a tax reform report but was never implemented, though the professor Shoup had proposed to Japan the introduction of value added tax in 1948. In the report of Japanese taxation, Professor Shoup stood his ground on the need for the first time in fiscal history for the introduction of value added tax fioni the report to Shoup mission USA. Michingen state was said to have experienced the implementation of what looked like a modified VAT in 1953 but the policy was neglected for about four years. Shoup first proposed VAT in Japan, while the French government began a series of tax‑reforms in 1954. These reforms included the imposition of VAT “Taxes Sur la Valuer a on the consumption of goods. Few years later Nicholas Kaldor who later advised the chairman government on tax reforms prescribed the implementation of the expenditure tax in India (1967). Although the expenditure tax project in India was twice implemented and twice rejected. It contributed to the fiscal ferment that the idea of taxing purchases or consumption then enjoyed use French value added tax could not but succeed the tax soon became popular and continued to gain a prominent place in the fiscal armory of many countries, in Europe, Latin, America, Asia and Africa.

Read Too:  Morale of Employees in a Profit Driven Organization

Since the 1960’s and 1980’s many countries in the world have moved over to (VAT). In the Europe (VAT) overshadow other system of indirect taxation in Africa due to the fiscal influence of France. The Francophone countries were the first to adopt the tax. VAT is a consumption tax. It is only paid if there is consumption of either VATABLE goods or services. The above statement has a very important implication on the efficiency on the part of the administration of the tax and ease of completion, R on the part of the administrator and even the taxpayer respectively.

1.      To look in the distribution formular since inception of VAT and the achievement so far from the part of the federal government, the duty payer and citizens.

2.      To know how the revenue generated is expanded throughout the federal, government to the state government and also to the local government.

4.      The research on the problem facing the taxpayer and the government and to render solutions to their problems.

PROBLEMS OF THE STUDY

Reaching a decision of using VAT. The government was faced with the problem of its collection and the administration of the tax.

HYPOTHESIS OF THE STUDY

1.      There is relationship between organizations that administer custom and excise duty with VAT.

2.      There is a relationship between VAT and the personnel involved in the collection.

4.      There no relationship between income flax and VAT.

1.      To identify the process and procedures in VAT collection and suggest solutions to problems encountered.

3.      To know all the protocol and the legal system involved in VAT.

5.      To get the populace informed on how VAT can improve the standard of living.

6.      To create awareness on the achievement.

The scope of the study will be covering at least three years after the introduction and implementation of value added tax in September 1993 and the story is expected to cover Lagos geographically.

Conceptually, this study does not cover extensively all the states in Nigeria but majorly Lagos State so as a result, findings here cannot be applied to other parts of the countries of the world and furthermore, the study is not covering the whole years since VAT has been in operation but only about three years since the inception and lastly it deals with vatable goods and services.

STRUCTURE OF THE PROJECT

The study examines critically the analysis of the effectiveness of Value Added Tax (VAT) in federal government revenue generation. The project is structured in a way that the chapter one contains the historical development of VAT, the structure and also the scope of VAT.

Chapter two deals with the literature review, which is divided into works of various authorities on the subject and state of development in the 6eld as well as the theoretical foundation of the study. The chapter three explains the methodology used in the research work.

In chapter four the data collected shall be analyzed. also the discussion and summary of all findings while the final chapter of the project will be the summation of the findings, the conclusion reached as well as providing practicable recommendation that can help.

1.      VAT is defined as a tax on supply of goods and services, which is eventually borne by the final consumer but collected at each stage of the production and distribution chain.

2.      Withholding tax is an advance payment of income tax and purpose is to bring the prospective tax payer to the tax net, thereby widening the income tax base.

3.      Gross Product Vat: It is when the input of capital purchase is allowed against the firm output tax.

4.      Consumption Vat: It is when the capital purchase are treated like the purchase of revenue items.

5.      Vat Exempt: This is defined as product or services on which the buyer or supplier does not have to charge VAT.

6.      Tax Evasion: Is an attempt not to pay tax at all. TAX WTE: If is the amount of tax that has to be paid. TAX BASE: It’s the object at which tax is charged.